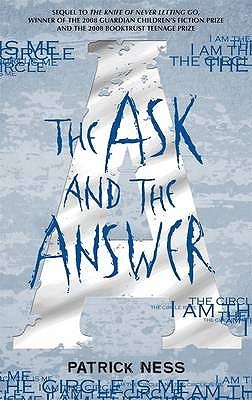 We were in the square, in the square where I'd run, holding her, carrying her, telling her to stay alive, stay alive till we got safe, till we got to Haven so I could save her - But there weren't no safety, no safety at all, there was just him and his men...

Fleeing before a relentless army, Todd has carried a desperately wounded Viola right into the hands of their worst enemy, Mayor Prentiss. Immediately separated from Viola and imprisoned, Todd is forced to learn the ways of the Mayor's new order. But what secrets are hiding just outside of town? And where is Viola? Is she even still alive? And who are the mysterious Answer? And then, one day, the bombs begin to explode...

"The Ask and the Answer" is a tense, shocking and deeply moving novel of resistance under the most extreme pressure. This is the second title in the "Chaos Walking" trilogy. 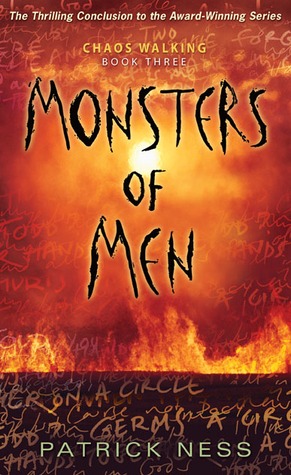 Three armies march on New Prentisstown, each one intent on destroying the others. Todd and Viola are caught in the middle, with no chance of escape. As the battles commence, how can they hope to stop the fighting? How can there ever be peace when they're so hopelessly outnumbered? And if war makes monsters of men, what terrible choices await? But then a third voice breaks into the battle, one bent on revenge - the electrifying finale to the award-winning "Chaos Walking" trilogy, Monsters of Men is a heart-stopping novel about power, survival, and the devastating realities of war.

It’s been ages since I read the first book in this intense, unique dystopian series, but when I started reading The Ask and the Answer, it immediately came back. The Knife of Never Letting Go is the kind of book that lingers with you long after you finish, and I honestly don’t know how I waited so long to find out what happened next!

The second book picks up where the first left off, with Todd in the hands of the enemy, Mayor Prentiss, and Viola taken away, close to death. Now the mayor – now President – has taken over the town of Haven, Todd is forced to work for him alongside his son, the man who shot Viola. Viola herself, meanwhile, is drawn into the vigilante group known as the Answer, who are fighting against the town’s new leadership.

This time we get both characters’ POV’s, and the author does a great job distinguishing the two voices so it doesn’t become confusing.  I was completely drawn into Todd and Viola’s journey. They have to make so many difficult choices and the morally right thing to do is never clear. While Todd is forced to manage the native Spackle, who are now slaves, Viola has to face some harsh truths when bombs start exploding and no one knows who’s responsible. The characters are all three-dimensional and flawed, and Mayor/President Prentiss is a seriously scary villain.

After the killer cliffhanger at the end of The Ask and the Answer, I was glad I had the final book at the ready! And wow, the ending of this trilogy most definitely did not disappoint. Jumping right into the action, we’re pulled into the heart of the war that erupted at the end of the second book. The plot moves at a breakneck pace towards an explosive finale, and I felt for the characters at every horrific twist and turn.

I don’t want to spoil the ending, so let me just say that it’s perfection. This is nothing like any other dystopian books I’ve read, and to be honest, it blows most of them out of the water. Hard-hitting, uncompromising and utterly unputdownable – I’d recommend this to everyone, whether you like dystopia or not.